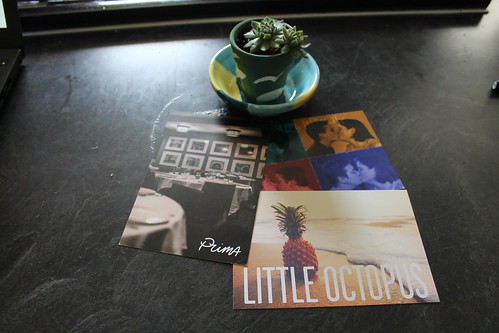 This morning, my subconscious chose to inflict on me an extended dream about work. This is in itself nothing new, but I am nonetheless vexed that my interior film projector can’t come up with better movies. It’s not as if dwelling on the heaps of deliverables will deal with them, so why can’t the reel revel instead in, say, ridiculous Bottega Veneta jackets? Sheesh.

In the meantime, I’m sneaking in some postcard-scribbling between work, working out, and housework. Some with addresses from Postcards to Voters and Americans of Conscience, and some as part of the August postcard poetry fest that doubles as a fundraiser for SPlab (the fest + service fee added up to 11.71 USD for me); registration closes July 19.

Three of the postcards I wrote on today are in the above snapshot; because there isn’t a lot of room on the cards, and I try to write something related to the image and/or stamps I’m putting on them, I am (so far) spinning out springboards rather than dives — that is, prompts rather than full-fledged poems. That’s OK. The ground rules emphasize that these should be first drafts, and each card is a handful of steps toward something more, which is more than I’d come up with left to my own devices when this hemmed-in by must-dos.