The publisher of Measured Extravagance, Upper Rubber Boot, posted a hundred prompts as a photo challenge earlier this summer. Prompt 27 is “dog-eared” and that brought to mind one of the two anthologies I’ve revisited the most over the years (the other being John Frederick Nims’s Western Wind, which was given to me twenty-nine summers ago and was my introduction to Katha Politt [“Turning Thirty”] and Muriel Rukeyser [“Effort at Speech between Two People“], as well as the John Ciardi sonnet I would later feature on an announcement, “Most Like an Arch This Marriage“). (Adding to my pleasure in the occasion: I know of at least one co-worker who, on being shown the card by a mutual friend, photocopied the cover for herself because she liked the poem so much, and another who subsequently purchased Ciardi’s I Marry You.)

I’ve owned this book long enough to un-ear some pages, sometimes because I ended up seeing the poem in question elsewhere and knew I would be able to find it again: 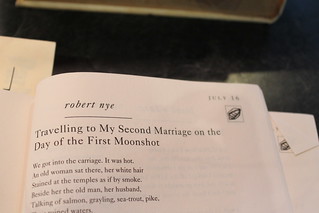