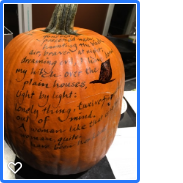 I was given a pumpkin last month just before Halloween, and lacked time for taking a proper stab at it, so I grabbed some markers and scrawled Anne Sexton’s “Her Kind” across it (and sketched a semblance of Anne’s face on one side).

A few days later, said pumpkin started leaking while in my kitchen, so we hurried it outside. A day or two later, I spotted squirrels doing their thing… 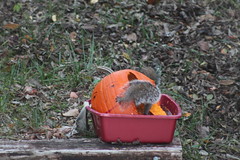 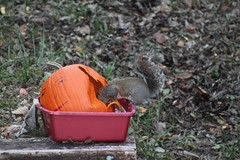 What I find far, far more obscene than local rodents romping with Miss Sexton O’Lantern is the behavior of various so-called public servants. Which is what led to this coming out of yesterday’s exercising:

I have gone out, whom they call bitch,
haunted by headlines, braver when I write
than when I dream, where with the hitch
that plagues my breath when awake I bite
down fire-curled curses, tame my mind
and modulate my voice to just above quiet.
I have been that kind.

I have found within old pockets of mourning
mustards hard as mortar, mayo soft as silk
and masking like poisons—like how milk
need not stink nor supply some other warning
before it brings a houseful to their knees.
I have buried shame amid indifferent trees.
I have been that kind.

I have been Cassandra, my screeching
marking not one slat of prideful walls
that keep no danger out. No beseeching
of gods will save us from the squalls
that care not who’s been good or who meant well:
the storms will scour us all from here to hell.
I have been that kind.